Who's Using PDP And How?

AMC Air Force Bases: Scott, McGuire, Littlerock, McChord, Pope, Travis, McConnell (2012)
Leaders have implemented PDP Mentoring and PDP Team Sessions with the Security Forces and EOD Units.
Results: Commanders received vital just-in-time data about the causes of stress and solutions to minimize that stress. A colonel at Travis AFB said, “I will ‘weaponize’ the data I received from the PDP sessions to make my squadron the best in the Air Force.”
Ramstein AFB (2012 - Present)
PDP sessions are being conducted by certified AF PDP facilitators who are Sergeants or Family Readiness Center folks.

The sessions are for leadership and squadrons to develop self-awareness of their strengths, stressors and satisfaction levels as well as solutions to reduce stress.
​
Results: Airmen who have attended these sessions are urging commanders to certify more leadership in the PDP processes for further growth and development of airmen at Ramstein.
Randolph AFB (2011)
Chaplains attended a PDP Mentoring session before being deployed to Balad Military Hospital.
Results: Attendees became aware of not only their own strengths, stressors and satisfaction levels, but also how to correctly identify patients' traits and respond to their needs.
Fort Lewis (2010)
Fifteen platoon sergeants were certified as PDP Mentors. The ProScan report was then used to structure dialogue and goal setting. Four wellness specialists were certified to interpret the team data reports that identified team strengths, stressors and satisfaction levels. They were also certified to use all of the PDP individual and team applications for immediate feedback to commanders. 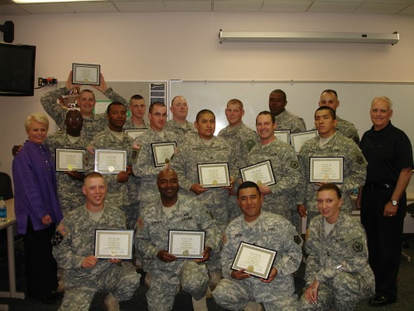 Results: All new airmen take the ProScan Survey through FTAC on their first day at their base to learn about their strengths, stressors and satisfaction levels.

General John Michel and LTC John M. Kinney have conducted several PDP sessions titled “The Power of the Positive” with AMC's new leadership and their spouses.

Results: These leaders have seen the value of the PDP processes for airmen and have implemented PDP at their respective bases.
Afghanistan and Kuwait (2009)
Chaplain, LTC John M. Kinney (USAF) conducted mentoring and team-building sessions for the leadership of all military branches.

"In the past 40 years of my own pastoral involvement of which more than 26 years have been in the Air Force, I find PDP’s ProScan Survey to be the most outstanding tool for individual and group mentoring that I know. The accuracy of this statistical behavioral instrument is beyond any of my expectations.
​
I have worked with MBTI and DISC for more than 2 decades. The ProScan Survey far surpasses their insights and even makes the survey results more effective for ongoing individual and group mentoring. I have used the PDP processes for 8 years now in deployed environments as well as at many bases with leadership, couples, families and airmen. Nothing compares to the depth and breadth of the ProScan Survey Reports."
Chaplain, LTC Kinney

Results: Only with ProScan did 3% of the soldiers not slip through the cracks but met Fort Carson’s thresholds for significant stress, low satisfaction and energy drain. Next, the 3% were evaluated by social workers; some were referred to psychiatry, and some were not deployable.
Navy Pacific Fleet (2008)
Chaplains were certified in PDP processes to mentor sailors throughout the Pacific Rim.

Results: Sailors felt that the mentoring provided better communication and listening opportunities than what they had experienced in the past. It was a helpful method for leaders to hear their concerns and then create solutions.
Air Force Academy (2005)
Using the ProScan data and the mentoring process, PDP-certified chaplains conducted mentoring and team building sessions for couples, medical and dental teams, and squadron leadership teams.

Results: For couples, PDP Mentoring enabled them to develop actions plans for handling differences in their marriage and resolving conflicts. For the teams, PDP team building increased effective communication and high performance while reducing conflicts.

Learn how to use PDP for your military unit.
Contact Nancy Kelly